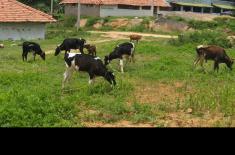 The Garuda Purana indicates that after death a cow needs to be donated on Vaikunta Samaradhana (11th Day after death). There are 16 cities that one has to pass on the way to Yama’s abode. They are Yamya, Souri, Nagendra, Gandharva, Shailagama, Krouncha, Krura, Vichitra, Vahvapada, Duhkada, Nankranda, Sutapta, Roudra, Payovarshana, Shitadhya & Vahubhiti. In between the cities named Vichitra & Vahvapada, the river Vaitarani which is a terrible river made of blood and guarded by fierce flesh eating birds has to be crossed. By donating a cow a boat will be provided to safely cross this river.In case a person has no children or if there is any uncertainty if Go Daana will be done by family members a person can donate a cow during his/her lifetime itself. There is no need for family members to do any ceremonies.The method specified in the scriptures is the Cowherd (Go Paalaka) should hold the tip of the cows tail and the person making the donation will need to keep a thulasi leaf on the hand holding the tail and pour a Udharani of water on the thulasi leaf. 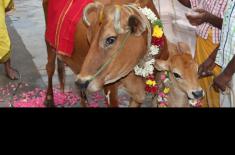 Creating a comfortable cowshed where cows can live where they are protected and taken care of. With the increasing number of calves being born in the Goshala and cows being donated (Go Daana) we are in urgent need of funds for extending the existing Goshala. We seek funds from philantropists for this.\\We are also considering having a well-equipped clinic for cows with a full time vet to take care of sick cows that have been abandoned by their owners. We are also considering purchasing an ambulance to carry sick cows to our clinic. 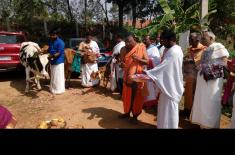 Most of the people don’t know their family deity. By doing GoSeva your prayers will reach not only your family God but 365 Gods, 9 Grahas, 12 Rashis & 27 Nakshatras that reside inside a cow.Making a Sankalpa (Strong Determination) and informing a cow of your troubles and problems during Go Pooja and feeding the cow with a wheat, jaggery and ghee mixture is equal to praying to God. 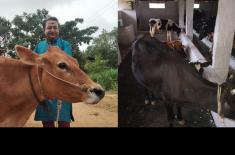 Bathing, Cleaning the cowshed, Removing Cowdung and maintaining hygiene, Brushing their coats, Caring for them and taking them for grazing under supervision are some of the Go Paalana Sevas. 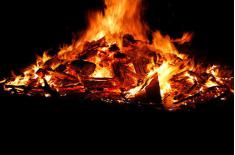 Cremation of a dead cow according to sanatana dharma methodology is considered the best form of seva. 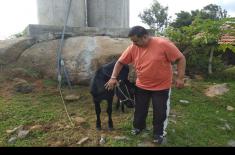 Go(Cow) Adopting for One Quarter (3 months)

Go(Cow) Adopting for 3 months includes Go bhojana for three months plus maintenance like bathing, pooja & other related activies of the Cow for 3 months .

Your Seva cart is currently empty.

An SMS detail of the password has been sent to the supplied mobile number.

Wait, I remember it now!